What is Atlas and when was it first used?

Atlas is a bipedal robot, or a droid, that was invented by Boston Dynamics and is essentially an upgrade on its latest model from a few years ago. Powered by a combination of electrical power with a very complicated hydraulic system, the Atlas droid is capable of walking through a snow, picking up boxes and opening doors (The Verge) amongst other things. Atlas is shaped like a human being with two arms, two legs, a torso and a head, and is almost six feet tall. It also has the ability to ‘manipulate the environment’ (Boston Dynamics) through its ability to climb, walk, carry etc. which makes it much like a humanoid. It can also weave its way through ‘congested spaces’ (Boston Dynamics) and so giving it greater flexibility.

How does the robot Atlas work?

Atlas’ movement can be explained by ‘dynamic balancing’ (IEEE Spectrum) i.e. a freedom of movement through its hydraulic system, and so it has the capacity to move and fall over without causing any damage. Furthermore, it is lighter than its predecessor, weighing in at almost half the weight at 82kgs while before it was 156kgs. Atlas is also wireless (its predecessor was battery-powered) and has ‘an articulated sensor head [which] includes sensor cameras and a laser range finder’ (Boston Dynamics) and so if Atlas is operated by someone, it can be operated by that person from far away. The sensors are located in the torso and the legs of Atlas which are both LIDAR (Light Detection and Ranging) and stereo. With the robot still being quite heavy, Boston Dynamics have opted for a ‘reasonable compromise between the quiet efficiency of electricity and the power of hydraulics’ (IEEE Spectrum). When outdoors, it would be more likely that the robot would be controlled by someone moving it but when indoors, the robot can move by itself as it has ‘its own balance and motion control’ (IEEE Spectrum). Marc Raibert, founder and president of Boston Dynamics, said that the critical theme to making Atlas was to make it more compact and lighter, and one way of achieving this was to ‘“use 3D printing to create the legs, so the actuators and hydraulic lines are embedded in the structure”’ (IEEE Spectrum). The servo valves of Atlas, which controls how the hydraulic fluid is used in actuator, are also much smaller and lighter than those used in its predecessor. 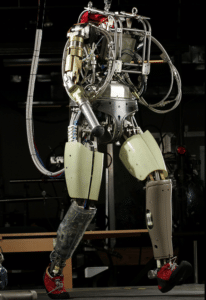 What does Atlas mean for the future?

Atlas is the newest breed of a whole range of robots that have been invented over the last few decades, although Atlas is a class apart from its predecessors as it has far better mobility and can do many more tasks such as lifting boxes. Atlas, being a robot, can perform a whole range of duties which can be world-changing such as ‘tending to a nuclear reactor during a meltdown…or helping to put out a wildfire’ (MIT Technology Review). Possibly the biggest sector that would be affected would be healthcare, with Seth Teller from MIT saying, ‘“the number one use for machines of this type is going to be in home care and health care”’ (MIT Technology Review). Atlas is still having a variety of improvements being added to it and so, in the near future, it may be able to react when pushed over by someone or something. However, the possibilities with Atlas are endless, and with more and more improvements expected to come from Atlas, more tasks that can only be carried out by people can be taken on by Atlas and its forerunners.

An innovated individual with a passion for the digital world.