Elon Musk has mesmerized the world with the Tesla Roadster revolving around the earth. Discover here how his genius moves are great examples of space disruption.

If you are still under the spell of these incredible pictures as I am, then you still can hear “Space Oddity”or “Life on Mars” from David Bowie.
Back in the seventies, when Bowie sang them, nobody would have believed that space would one day be accessible to ordinary people, ordinary people with a serious amount of cash of course, but people who at least would not need to be professional astronauts or rocket scientists.

Space could be the new fashionable place to be, a true tourism revolution.
But beyond the launching of Falcon and the possibility of traveling into space, what is at stake ?
Some people may ask what is the point of it ? Some might frown upon a prerogative normally left to national space agencies such as NASA or Arianespace, that is being hijacked by those new commercial space tour operators…

Here are 3 ways of how Elon Musk is disrupting space :

Elon Musk has talked about launching around 4425 satellites into space.
His goal is to build the largest existing satellite network.
These small satellites orbiting above the earth would enable high-speed internet almost everywhere. Telecommunication companies started to worry seriously when in September 2016, unfortunately for SpaceX, a Falcon 9 rocket exploded on a launch pad, delaying this project.

Never giving back being in Musk’s DNA, SpaceX launched rockets again right away, every time improving a little more. This new satellite network could be the end of traditional telco companies, the ones that use optical fibre or copper wire solutions as installing expensive infrastructure on earth won’t be necessary any more.

If it works, SpaceX satellite network could be a huge game changer in the telecom industry, revolutionizing the ecosystem completely… 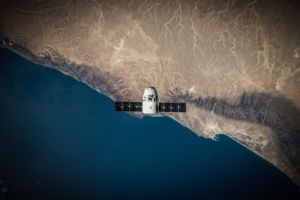 According to SpaceX, they “design, manufacture and launch advanced rockets and spacecrafts. The company was founded in 2002 to revolutionize space technology, with the ultimate goal of enabling people to live on other planets.”

What a very ambitious goal if not utopian ! But, is it that utopian ?

Launching Falcon 9, the reusable rocket, is the first step to colonize Mars.
Elon Musk has declared many times that mankind could survive the possible incoming global disasters ( environmental, biohazard…) if it could migrate to another unspoiled planet.

By this, “Nerdy Elon” shows how much of a Sci-Fi geek he is.
Like him, we were raised on pop culture influences such as Star Wars or Star Trek and we all thought how cool it would be to travel from a solar system to another one, changing planets in a matter of seconds thanks to well advanced technology. But when we stop dreaming and go back to our very down-to-earth life, “Lightyear Musk” is not satisfied with the dream only, and wants so much more.

Space exploration is no more the sole preserve of state agencies. Space conquest is no more a matter of showing the world how powerful your country is. SpaceX,like the other competitors, are more focused on the user experience of traveling into space, enabling the wealthier for the moment, to have a piece of “space cake”.

What is the point of sending a Tesla car into space ?  Of course, there is some kind of magic watching the electric car drifting  away from our planet, symbolizing the dream of leaving the earth to explore other worlds. But beyond that dream, what I see is a genius marketing move. Few companies have had the opportunity to combine two different brands in a single promotional event, each one fueling the other one. 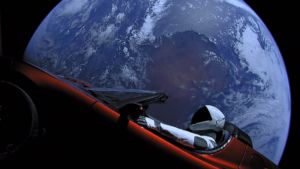 Showing that Tesla on every TV channel of the world and on Youtube (million views) didn’t cost a dollar in advertising whereas this commercial is going to boost heavily Tesla car orders. And guess where all the money earned with Tesla is going ? To R&D for SpaceX of course !

We are still wondering where this out-of-the-world slasher : engineer/inventor/ entrepreneur/visionary is going to take us next time…

To infinity and beyond ?