Stumbling on the challenges of mobility, communication and shopping for shoppers becoming communitarian, the modern urban war of social commerce will take place.

Throughout the world, experiencing an ethno-sociological mutation of their populations, many metropolis are constituting themselves like towers of Babel, with a goal of Power based on the confusion of languages and minds, and the retention of information hoarded by the upper classes. The populations (inhabitants and the ones in transit) receive simplified, irrelevant, ineffective information intended to produce an artificial image of a utopian world maintained by politically correct-thinking people. 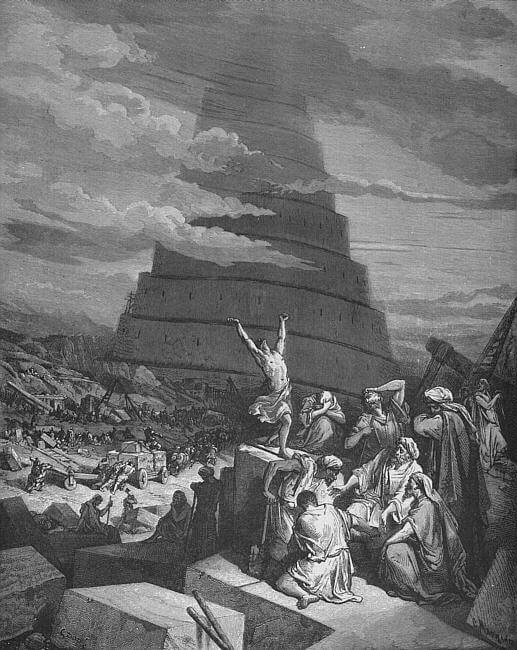 Over the past 15 years, depending on the country and metropolitan area, major international geopolitical and migratory phenomena of diasporas have been added, particularly in Western countries, to the disruption of traditional left / right political cleavages, as well as to a fight now between the people and the globalized elites. To the abandonment of the integration policies of certain societies for a forced march towards inclusion then the community substitution of populations is added, here an unbridled liberticidal urbanization (SRU law in France, stop to some to individual car transport infrastructure, etc.) , there is a bobo’ptimistic digitization of global smart cities and artificial intelligence, which promotes the omnichannel acceleration of connected commerce in city centers.

2020-2035: For the next 15 years, by imposing this rhythm and this pressure, the Policies than have been engaged are giving distributors, brands / suppliers, as well as the acting consumers who are these exponentially diverse communities of committed shoppers, the liberality of s ‘confront socially on the networks, geographically close to the block, in a multi-party clan war which is only just beginning.

In 2019, out of 4 billion urban inhabitants, at least 1.8 billion actively use social media on mobile. 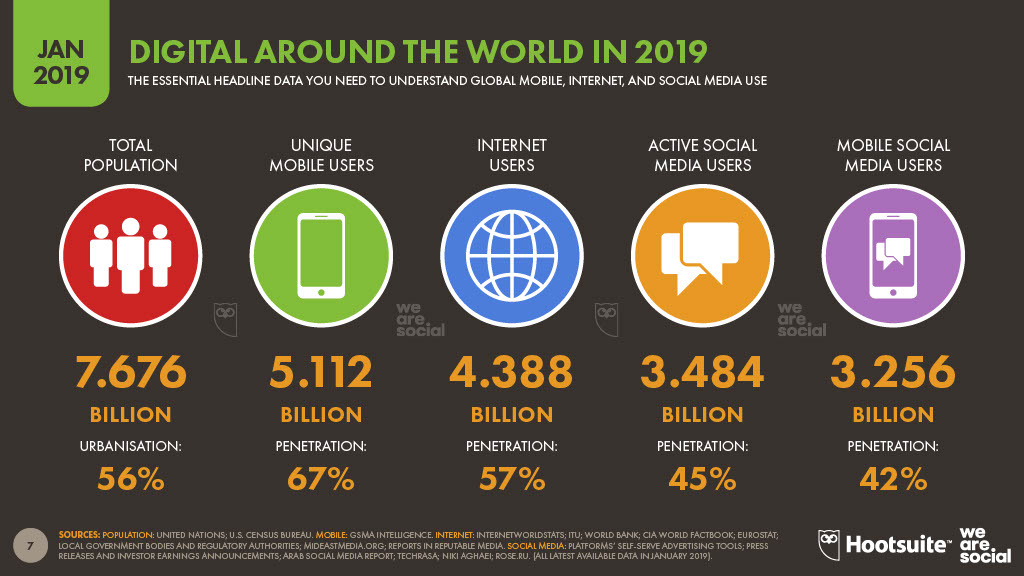 Hootsuite We are Social – Digital Around the World in 2019

By 2025, a third of cities in emerging markets (including 100 new Chinese cities) will replace cities from developed markets in the Top 600 cities driving 60% of global growth. 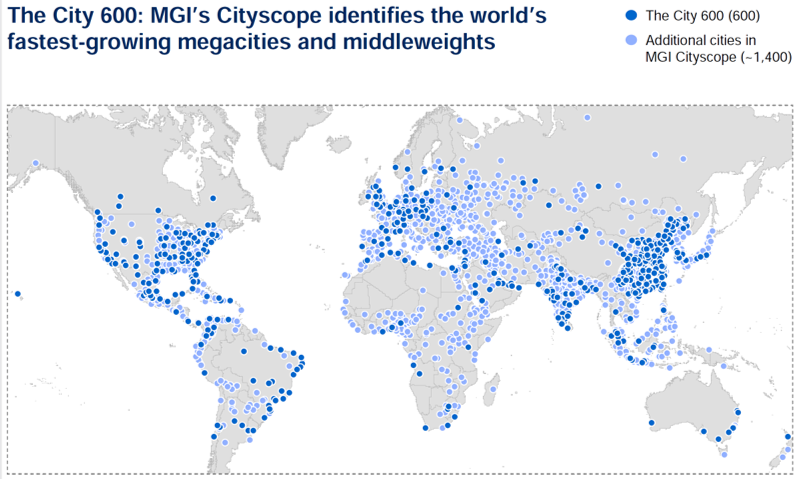 This top 600 will always include world-cities like Paris, above all it will include 310 million people of working (and consuming) age, 95% from emerging countries. 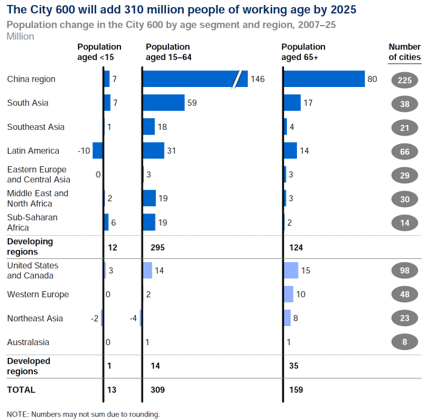 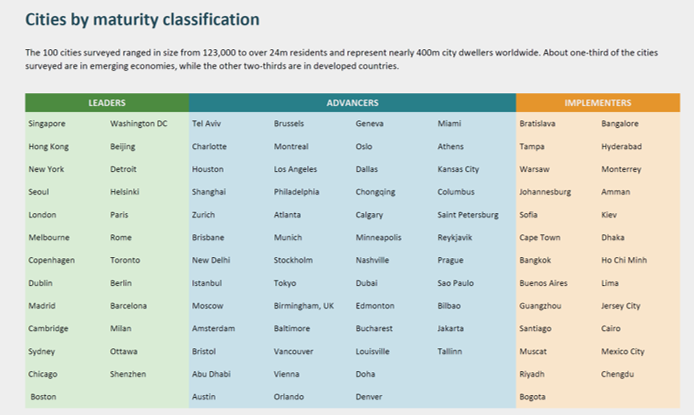 They will use AI more than elsewhere and the use of digital technologies will jump by 3 digits. 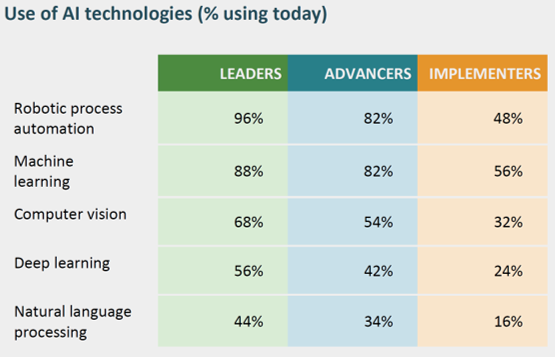 They will appoint Chief Citizen Experience Officers, responsible for the end-to-end citizen experience, ensuring that websites, call centers and applications are designed according to their needs and values. . In some cities, this will involve responsibility for the experience all the way to community events, downtown businesses … 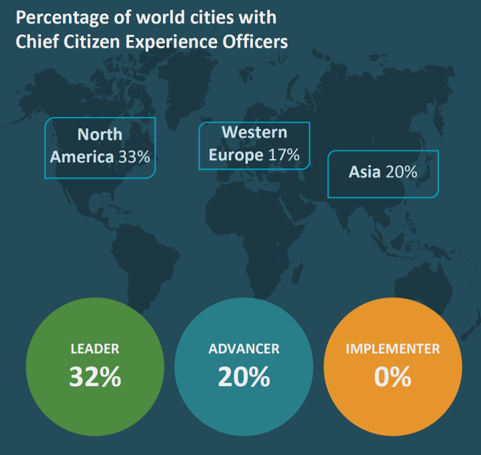 Nowadays, the youth of the countries of the southern hemisphere over-consume mobile media, and easily access the most sophisticated connected commerce via super apps, queens of the mobile ecosystem.

The content and services offered in WeChat to young Asians, not visible outside of China, are powered by a handful of meta-applications allowing the monitoring of all movements, communications and purchases of a billion 300 million Chinese. 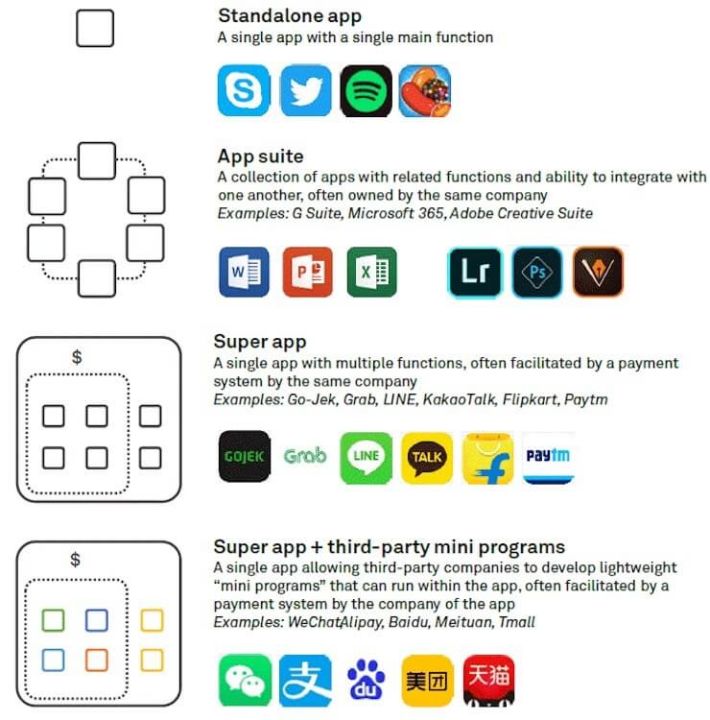 Meanwhile, in old Europe with smaller urban densities, as in France, we realize that the deployment of digital technology has not settled the inequalities of territories:

When entering the first job, to describe himself socially, the globalized individual will define himself better by what he consumes than by the object of his own work. The “I am what I share” (translation of “I am what I share”) is easier to understand and explains why members are active and consumers of data plans.

In the countries of the northern hemisphere, it is at the same time the retail apocalypse which prefigures the modern urban war of social commerce 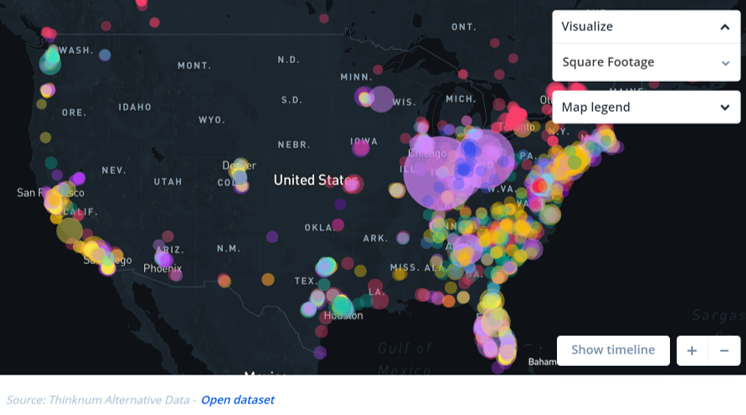 Availability of retail space by Property and by City. USA 2020

than the rush for “everyday apps” 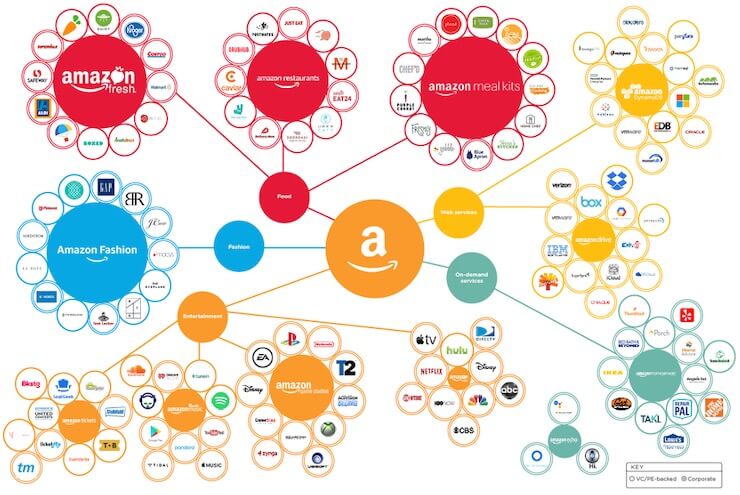 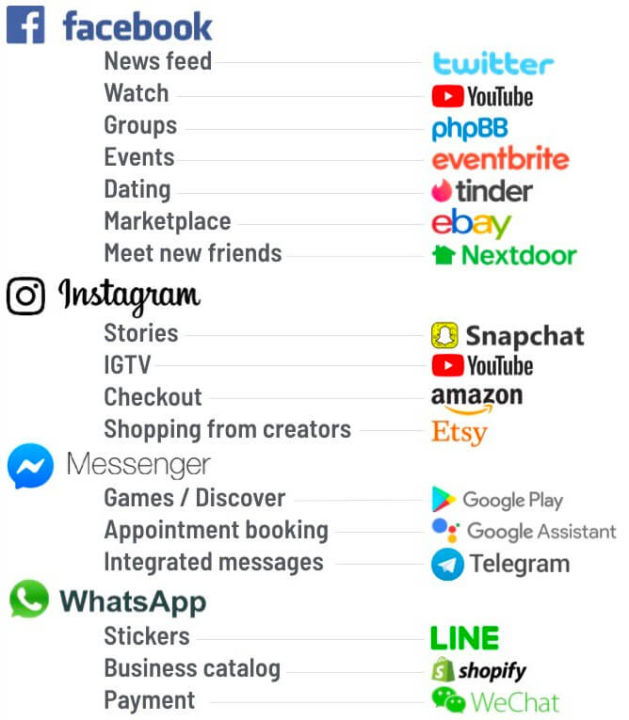 Depending on the eras, there are 6 major forms of organization of diversity in the world, 2 of them having the seal of political correctness currently in vogue in progressive countries.

Illustration inspired by the Senate information report: « Culture and disability: a democratic requirement

Exclusion (banishment), Segregation (slavery), Integration, Inclusion (starting from the weakest), to which we will add Communautarism as a victim with a hegemonic political aim then various forms of genocidal Eugenics based on the physical elimination of deviants from thought unique.

Urban centers, both places of transit and of habitation, are in the West redesigned under ecological pressure in favor of flows of soft mobility and a withdrawal into oneself (voluntary discrimination / physical dissociation of the city from its periphery, abandonment of highways, vacations of doorstep / commercial area, opening of cycle paths for the sole benefit of the inhabitants of the city, creation of urban storage space for omnichannel and development of trade in multimodal hub (multimodal hub, such as the redevelopment project of the Gare du Nord in Paris). 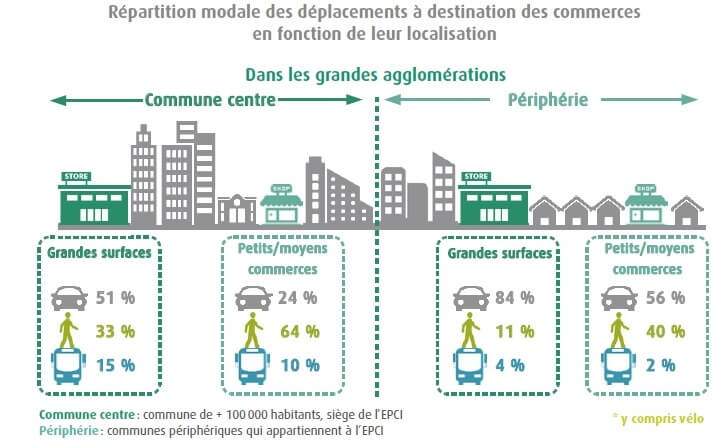 Source: Unified base of household-travel surveys, 2017

In China, as in most emerging countries with rapid growth, massive urban planning has been the order of the day with the ex-nihillo creation of satellite cities located on the outskirts. Today, in the Western world, faced with the difficulties of regulating land use, this practice of urban planning is being called into question by new approaches. The formulation of a Chinese model of urban planning could therefore go through this concept of harmonious development which would make it possible to synthesize the Chinese approach and the various Western influences.

Cities have succeeded in relaunching their local commerce not by encouraging their accessibility by car but by discouraging its use, such as Madrid, which has implemented traffic restrictions in part of its city center, saw its commercial activity increase by 9.5% over one year, Toronto, which has put in place a bicycle lane to replace a 2.4 km car parking strip, has measured an increase in the number of customers and the average basket. Arras (40,000 inhabitants) after having pedestrianized one of the 2 squares in its town center has since observed a sharp increase in the number of visitors to its shops.

Food Retail : So, Convenience Store, it is working or not ?

In France, despite urban densification, the growth of urban convenience stores has been declining for three years and fell in 2019 by nearly 2% (and even by 3.7% in number of articles). Despite the investments of brands and numerous consumer studies evoking a return to proximity (the success of which would have been linked to consumer demand for stores that are closer), it is perhaps more a phenomenon of offer, with the updating of formulas from the past (but also new concepts, new services, etc.) which made it possible to catch up with customers who had deserted it, but without really recruiting others. Indeed, this urban proximity, which currently suffers the most, has three handicaps: an increasing difficulty of accessibility, a lower choice (in food trade) and a price scale too high to appeal.

Which place for Non Food in urban landscape ?

In France, for the launch of new non-food concepts (non-heavy, such as fashion, decoration, cosmetics, etc.) from abroad, the shopping streets are keeping the coast. In addition to Paris / IDF which counts for 72% of brand launches (with the Marais, Saint-Honoré-Vendôme, Saint-Germain-des-Près districts), in the region, it is the East as well as the PACA region that attract.

Large Agglomerations: Residents of city-center and periphery do not get lost in translation

Source: Unified base of household-travel surveys, 2017

In France, with the patronage of political parties and a timely media omerta, denounced by Bernard Rougier, Islamic ecosystems are redesigning certain urban centers. Abandoned small businesses (the average commercial vacancy rate in city centers fell from 7.2% in 2012 to 11.9% in 2018) followed, between two closed curtains, Halal Friendly windows. 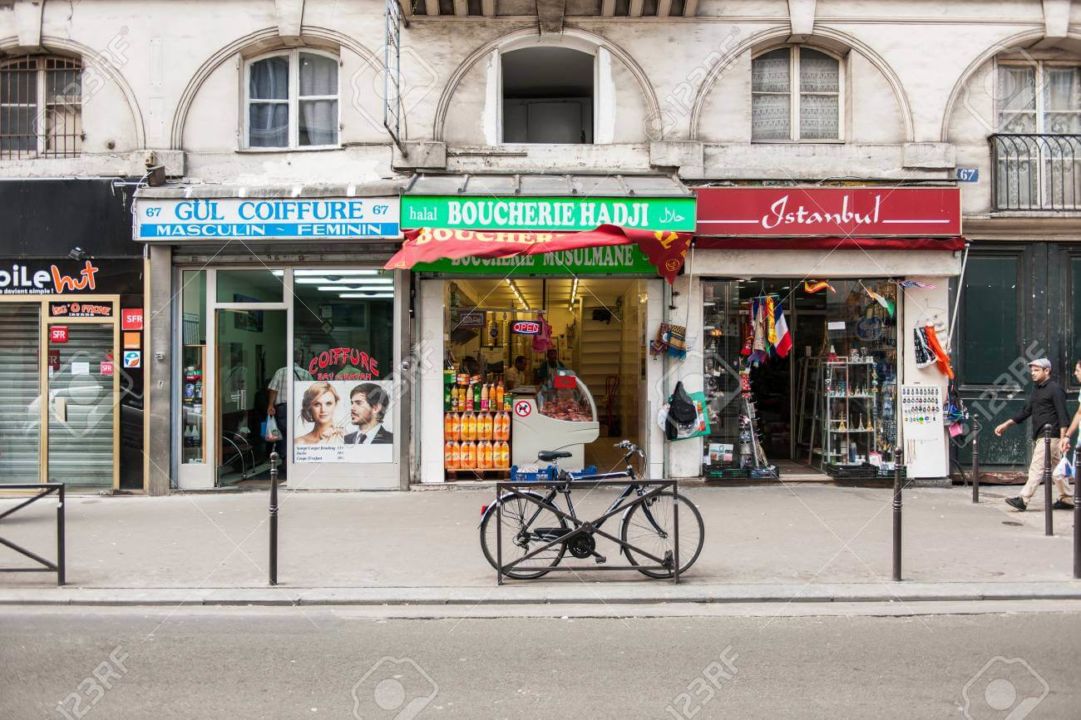 In the USA we practice communitarian marketing. In California, people of Hispanic origin make up 40% of the state’s total population. Since the 1940s, many Hispanic chain stores have sprung up. In San Francisco, Castro, a former district of the Gay community, has become by extension LGBTQ or even LGBTTQQIAAP.

Community management: Headache or Casus Belli for brands and retailers?

The new generation is considered by Bernard Cova as « Queen of ephemeral engagement » since many Internet users are simply passing through the communities. The immediacy and availability of information promotes utilitarian behavior in the moment and inconstancy in the long run, even when communities have a solid base of loyal members.

The success of communities is linked to the fact that members, initially isolated in their environment, trust each other. They give each other information for free, they share for a common goal and not at the expense of each other, they don’t fit in, they get by. Therefore, the emergence of Businesses in communities may be frowned upon, because they are associated with the concept of money and question the concept of non-profit exchange … and resourcefulness.

At a time when customers interact with each other and talk about brands on social networks and community platforms, engagement is more than ever a key indicator for brands. For engagement to be synonymous with income, you have to engage your community where it is located (downtown residents or people in transit), very precisely in a geolocated manner, and follow the right indicators.

For a brand, how to measure the value of its community? And, outside of its target community, what will be the cost of a Bad Buzz with communities that it does not yet target in a given territory? Is this the modern urban warfare of social commerce?

Is it necessary, as in the case of Decathlon,

or in the case of Netflix,

to let their France Community Managers take sides with minority communities to the detriment of others, without realizing the global Vs local issues or, as in the case of the Blackface of Slip Français employees, probably falling further under the blow of the law of social networks rather than legally punishable racism, leave unpunished urban insurrectionary practices taking brands and consumer communities hostage, by setting them against each others.

Or, to paraphrase Riss, should these brands and consumers urgently learn « to say shit to tyrannical associations, to navel minorities, to bloggers and bloggers who … tap their fingers. » 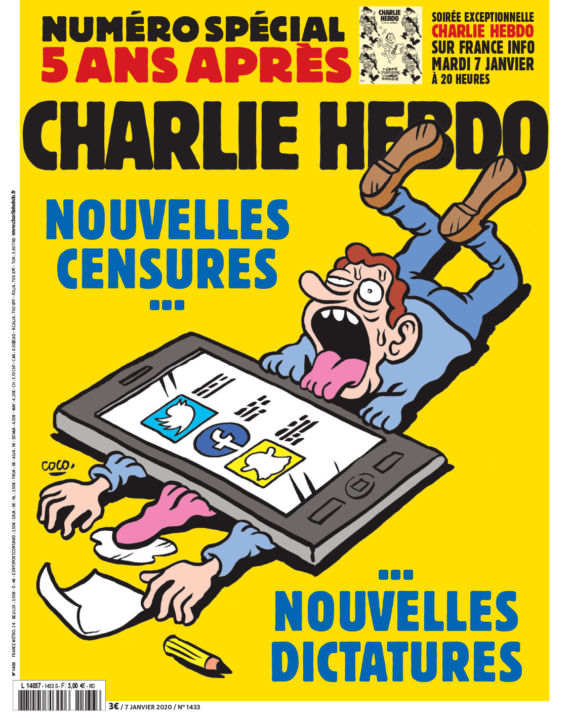 Political correctness which “imposes gendered spellings” and “advises against using supposedly disturbing words”, and “new censors” who “believe themselves to be the kings of the world behind the keyboard of their smartphone” and their informing tweets which promise direct access to hell, seem to lead social commerce straight into lasting modern warfare.

Hootsuite, We are Social. Digital 2019. https://wearesocial.com/global-digital-report-2019

Thinknum: The current state of the retail apocalypse visualized  https://media.thinknum.com/articles/the-current-state-of-the-retail-apocalypse-visualized/