Growth hacker – What does it take to be one?

Précédent Suivant
Growth hacker – What does it take to be one?

Growth hacker is the position many companies have wanted to recruit to scale up their business. But before looking for one, why not have a look at who exactly a growth hacker is, the person will likely be part of their marketing team?

Growth hacking has become a buzzword for about 5 years with millions of sites bringing up the subject. Rookie to the field? Overwhelmed? Don’t know where to start? I see I see. Before you want to dig deeper into it, let me share with you the 3 must-have traits of a true growth hacker.

Let’s start with what Sean Ellis, the father of growth hacking, defined first:

A growth hacker is a person whose true north is growth.
~ Sean Ellis ~

So where does this non-twisted definition of growth hacking leave us? Doesn’t he try to spread the implicit message of permanent personal development, or simply put, growth? Again, what is growth really about? Why does it appear in basically every description? Let me break it down into these 3 most important characteristics of a growth hacker below.

Have a growth mindset vs a growth hacker

Growth hackers need to adopt a growth mindset. Sounds too obvious? But how does growth mindset is super important in this field? In fact, people with growth mindset hold a strong belief that effort is a driving force of the development of their initial qualities. Additionally, no matter how different each person is, anyone can grow through will, determination and the right method. Ever heard of the following Chinese proverb?

Be not afraid of going slowly, be afraid only of standing still.
~ Chinese Proverb ~

It is a perfect description of the other characteristic of a growth hacker. They understand that success lies in the process but not results. Regardless of how slowly they are growing, the most crucial thing is they stay determined and they don’t give up. This mindset is implied in Sean Ellis’s description as part of not only business mentality but lifestyle of growth hackers. Throughout the journey to success, there will always be its ups and downs. Yet, whatever life throws at them, they see it as an opportunity where they can learn and make adjustments since life never stays still. As long as they progress and face failures head-on, they believe that they are doing just fine.

In the meantime, here is what fixed mindset individuals usually tell themselves:

(Drawing) is not for me. There is nothing I can do about it.

Either I’m good at it or not.

It’s easy for him/her. They were born smart.

That is to say they believe that qualities are something set in stone or inborn. If they see someone become successful, it is because he/she possesses innate talents. It leads to the fear of trying out something new as this type of experience is very risky and terrifying. There is no guarantee of success, the opportunity in which they can prove themselves. Hence, they will likely abandon very easily. And if they fail, all their efforts for them will be wasteful and it humiliates them. 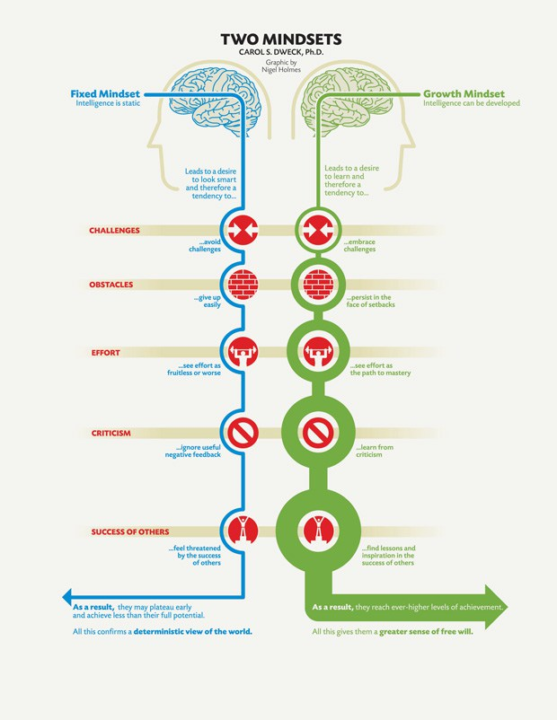 A concrete example to illustrate these descriptions is the research on elementary school students conducted by Carol Dweck, a psychologist from Stanford University. To be more specific, Carol Dweck and her team asked these students to take an IQ test. They then congratulated half of the subjects on their efforts: “Wow, you worked very hard” but the other half on their results: “Wow, you are brilliant.”

And guess what? Pupils praised for efforts were not afraid to take on greater challenge whilst those praised for their performance and qualities were much less willing to experience something of that sort.

She accordingly concluded that students who are more successful in studies have growth mindset and the contrast for the ones with fixed mindset.

So, if you are wondering why growth mindset matters, here is the answer: Growth hacking is a non-linear process. Given that success is never overnight and the path to success is not straightforward, growth hackers have to experiment A LOT of frameworks and channels to know what works. The fact of experimenting different methods may sound quite cool. Yet, imagine that you might fail thousands of times before being able to find the right strategy for growth, would you still enjoy it as such?

In this sense, growth mindset plays a significant role in keeping them going, being persevering and dedicated even though there can be setbacks along the way. Among the hurdles to overcome during the test and learn process, they may have to build, test, rebuild the path till they figure out which one is the best. This adventurous journey will indeed be for people who can see a bigger picture of growth as an opportunity to learn while taking risks and working hard to thrive on challenges. And that is how a growth hacker should be.

Think out of the box

In order to formulate a good strategy, a growth hacker has to back it up with data, but it doesn’t mean they only have analytical thinking. Indeed, “growth hacking is both an art and a science” says Michael Birch, one of the first growth hackers and co-founder of Bebo. They will do their best to push forward the frontiers to find new methods of acquiring new customers. What Greg Tseng, co-founder of Tagged, pointed out will help explain clearly why creativity is an essential trait for a growth hacker:

Are you good with both sides of the brain? If you are only creative, you’ll never know how good your ideas are. If you only have an analytical mindset, then you’ll know precisely how bad your ideas are!

When you look at the skill set of a growth hacker in the photo below, they possess trans-disciplinary knowledge from UX/UI, social media, to coding or machine learning. Without being creative, it would not be easy to come up with a design to match user expectation, which will later on be tested by data to have more insights. 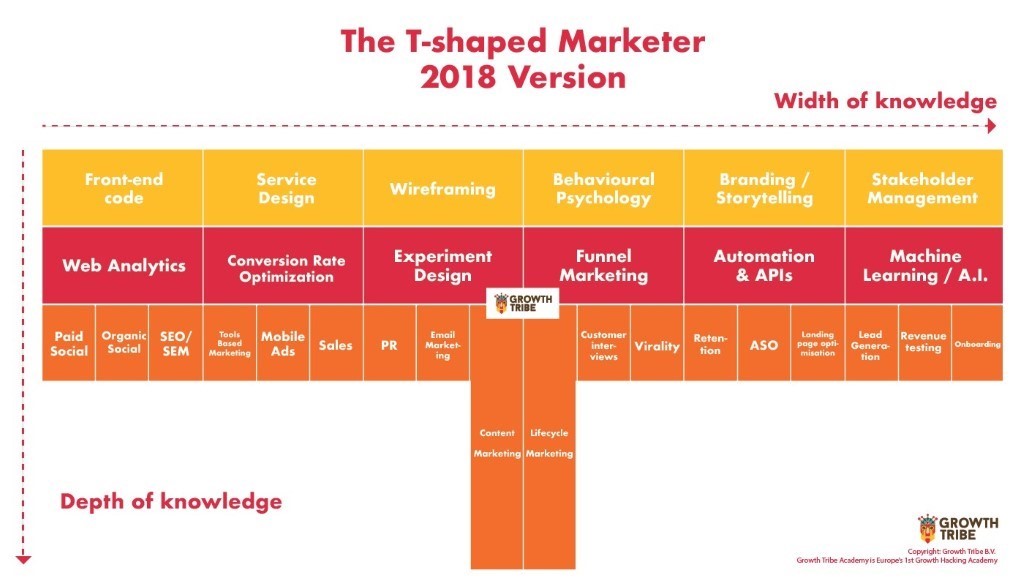 These following examples of non-conventional marketing strategies will show you why thinking out of the box makes these campaigns game changers.

I am pretty sure that you can hardly forget the Ice Bucket Challenge, which first launched in 2014 to call for donations for motor neuron research. By simply asking participants to film their experience of being thrown over by ice water, it succeeded in raising more than $115 million.


This viral event is a combination of using social media to make an influence and driving offline participation. In this case, people who take up the Ice Bucket challenge will nominate other people to join in. The idea is not to do it for fun but to show how they rise to the challenge. This intriguing concept is what draws everyone’s attention from celebrities, businessmen, to those committed to fighting the disease and of course attention seekers.

The other example is how BTS (Bulletproof Boy Scout) had the biggest fan base (ARMY) in the world:


By using influence marketing and social media to leverage the messages that the band promoted “stand up for values and ideal of today’s adolescents”, BTS has built an “army” of followers who support this ideology. You can find out more about how brilliant their marketing strategy is in here.

Be curious but stay focused

There is a saying, curiosity kill the cat, but I believe not the growth hacker. Since there is no formula for success, they can only ask themselves any questions then experiment to find out answers. But they don’t forget that their true north is growth. To acquire more customers and develop the business or product, the most important thing is to put customers at the heart of any strategy. For example, a growth hacker is curious to understand customer behaviour like why visitors choose to become customers or what they can do to retain them. QuickSprout showed how curiosity may look like:

Some people might think that these ideas sound crazy. But if you take a look back at the Ice Bucket Challenge I mentioned earlier, didn’t the idea of accepting the experience of having ice thrown over also sound crazy at first? Then this campaign achieved an enormous success for its unique concept. So, instead of being afraid of being different, let’s put aside your fear and have the guts to write down your ideas. You will never know because sometimes it is crazy ideas that make the whole difference.

Hopefully, this article gives you an idea of what a growth hacker looks like. To me, growth hacking should at first be about the mindset then skill set. Do you share the same opinion? To explore different aspects of this field, let me suggest some related articles below: