Is Estonia the eldorado for startups and entrepreneurship?

Précédent Suivant
Is Estonia the eldorado for startups and entrepreneurship?

Let’s dig into the digital country where all projects and services are based on state of the art technology for specific goals: improve day to day life of Estonian people and encourage entrepreneurship ! Is Estonia really the digital eldorado for startups and entrepreneurship that everybody is praising?

The figures speak for themselves:

History and geography have had a strong influence on what has become Estonia nowadays. Indeed, the low density of population (28,4 inhabitants/km2), poor transport infrastructure and the urge to get the country back on track after independence was finally declared (freed from the Soviet Union in 1991), led Estonian people make some radical decisions with one major constraint: a low budget.

They had to start from scratch, they did not have money to build huge state infrastructures. This is how, in a very short summary, they decided to go fully digital and create their own IT infrastructure with their skilled IT engineers.

Estonian president Kersti Kaljulaid said in an interview in February 2019 to CNBC :

« We did it straight away digitally »

They only had to build optical fiber network with communication services to give birth to the beginning of the wide range of services that we now know. Technology is one starting point but people getting to actually use it and see the benefits they can get from it, is another story. They managed to create a safe and trustworthy environment Estonian citizens believe in and this is one important keypoint.

A country where you will not be asked to give the same information twice during your lifetime as a citizen!

Estonia is a country which designs itself as a platform of services that aims at facilitating and improving its citizens’ quality of life. All administrative procedures are done online except marriages, divorces and real estate purchases (by choice). Internet access is a fundamental right since 2000.

They have created this concept of « platform state » which has the willingness to go outside its own frontiers and anticipate the crisis when GAFA companies take the lead to provide the citizens with all the services they would expect. In her book, Demain, tous Estoniens, Violaine Champetier de Ribes (a must-read for anybody interested in #digital, #blockchain and #CivicTech) is talking about the concept of “solutionnisme transnational” (transnational solutionism) to describe this situation.

Here are the main e-services Estonian government has implemented up to now: 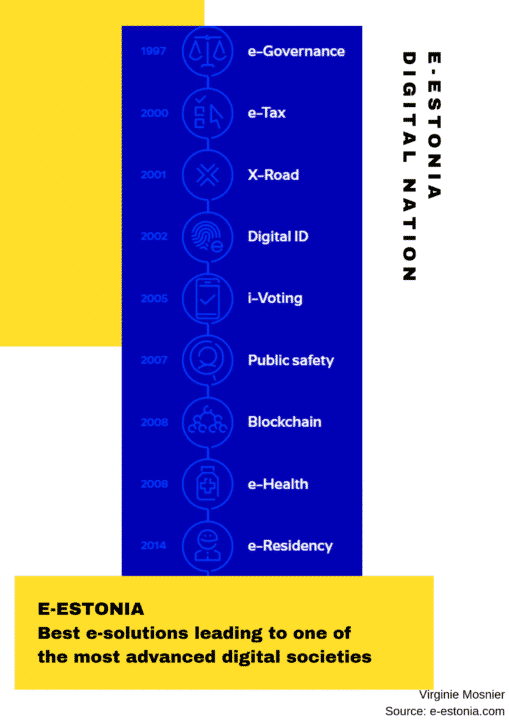 The X-Road service (to be pronounced Cross-Road), is at the core of their digital system and digital identity concept (here’s the corresponding White Paper). All Estonian citizens have a digital ID card which enable them to identify themselves, use e-services and sign documents electronically using their ID-card, Mobile-ID or Smart-ID.

E-education: By 2000, every school in the country was already online. In order to stay ahead and keep up with European and worldwide digital pace, Estonia and its leaders know that future generations need to get education on some specific fields such as IT or coding. This is why, in 2012, they launched a project called ProgeTiger, based on a public-private partnership in order to teach how to code to children above seven years old.

Cybersecurity: Because 99% of all government services are online and because, they had to deal with a series of massive cyber attacks back in 2007, Estonia has developped expertise in the field of cybersecurity. Then, it has logically become home for NATO Cyber Defense Centre of Excellence as we all know that cybersecurity is key to our digital societies.

Healthcare 4.0: Today, more than 95% of the data generated by hospitals and doctors has been digitized to create electronic records which contain all information regarding the patient’s medical notes, digital prescriptions, test results as well as a full log-file tracking access to the data. Blockchain technology is used in order to ensure the safety and integrity of stored digital medical records. According to the European Commission 2019 report on Digital Economy and Society Index (DESI), Estonia ranks highest in the e-health domain (out of the 28 EU member states).

So many startups were born and raised in Estonia. Some of them, very famous, such as Skype (do I really need to present it?), Transferwise (a Fintech startup that enables secure and really cheap money transfer), Pipedrive (sales management solution) or Bolt (previous Taxify, a ride-sharing company and Uber competitor).

Up to now, there are approximately 650 startups in Estonia. The main sectors where they operate are: Services & HR (108 startups), Life sciences & Wellness (58 startups), AdTech & Creative Tech (98 startups), FinTech (69 startups), HealthTech, Business software and CleanTech (48 startups). It seems that the next hot topic is cybersecurity as since the beginning of 2019, 10 new cyberTech startups such as FakesKiller.

The Estonian state itself has taken the inititiave to create an incubator called Startup Estonia in order to foster the dynamism of the Estonian startup ecosystem and entrepreneurship. The podcast they have initiated explains more than any word this fertile environment where they get to interview  successful Estonian companies’ inspiring founders.

Investments (EUR) to Estonian startups 1st half of 2019

E-residency is also a good example of Estonian dynamism on entrepreneurhip. This is a service that allows individuals to start businesses in the country without living there. Since the beginning of 2019, Estonia is currently promoting this new service heavily.

It enables e-Residents to set up and manage businesses remotely, add digital signatures to contracts, make online payments and use a number of private sector e-services to handle cross-border businesses. By 2025, the objective is to achieve a business environment of 10 million e-Residents. As of April 2019, there already are 54,500 e-residents, with people from 154 countries worldwide having applied for it. 67 % mention the ‘location of an independent international business’ or ‘bringing business to Estonia’ as their motivation for applying. 6,586 new companies have been established by e-residents.

In order to show the world this brilliant state of mind of entrepreneurship, Estonia has built a briefing center in order to offer a comprehensive overview of Estonia’s public e-solutions. It is then possible to organize a visit for global policy makers, political leaders, corporate executives, investors, startups, international media or just curious individuals wishing to know more about the underlying mechanisms involved in digitising a society.

To my great surprise, Estonia ranks (only) 8th out of the 28 EU Member States in the European Commission Digital Economy and Society Index (DESI) 2019.

Indeed, the key challenge the Estonian economy is currently facing is the digitisation of companies. Quite surprisingly, even though entrepreneurship with startup is really advanced, other Estonian companies are still not fully exploiting the opportunities offered by digital technologies. Also, regarding Internet infrastructure, fixed broadband coverage is still well below the EU average, as many people live in rural zones with low availability.

To conclude: test, fail, learn, succeed and stay ahead

The more I get to know the projects they are currently developing, the more I want to go and visit Estonia. This year, I went to San Francisco for a learning trip. I got the chance to visit Silicon Valley, and some famous startups (which are not startup anymore for most of them!) which shaped the face of the US as an innovative high tech country. I guess the destination of my next learning expedition will be Estonia!

One of the key similarities I can see between both countries is the deep belief in the “test and learn” spirit. All the people that we have met in “Frisco” insisted on the fact that this way of being able to bounce back from failure is so important and deeply rooted in American entrepreneurship culture.

Further east, regarding Estonia, it is clearly stated on their official website, “building e-Estonia as one of the most advanced e-societies in the world has involved continuous experimentation and learning from our mistakes.” This is something we still tend to forget: failure does not matter as this is one of the best effective ways to improve and finally succeed.

Obviously, some will say that Estonia is a small country and one cannot apply to bigger countries but we definitely need to understand that the way they have built their country is very effective (they did it fast!) and the inspiration for entrepreneurship we might need is not always above the Atlantic ocean but right next to our European frontiers!