“Drones overall will be more impactful than I think people recognize, in positive ways to help society.” 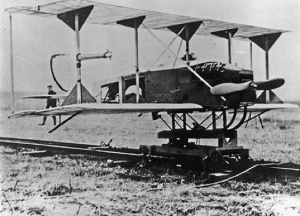 The drone market is dominated by the military function. As seen in the History part, the drones were first imagined for military use. However, with the beginning of the 21st Century, civil activities started to get more and more importance, overturning the tendencies. Indeed, in December 2001, Amazon CEO Jeff Bezos revealed his newest and most innovative R&D project: “Octocopter” drones that could fly packages directly to the customer’s doorstep in less than 30 minutes.

The civil market has been developing in different sectors such as Agriculture, Energy, Utilities, Mining, Construction, News Media, Film Production, etc. Moreover, used by the police, firemen, coastguards and so on, drones also help people saving lives. There are hundreds of examples where drones are becoming essential in our everyday life.

What about the future?

In a report from BI Intelligence, it is forecasted a compound annual growth rate (CAGR) of 19% between 2015 and 2020. 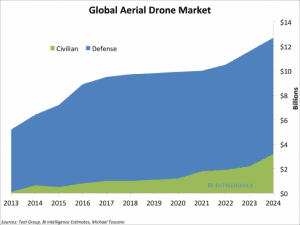 3. Drones in Healthcare and Medical sector

Innovation and technology keep improving healthcare and the medical sector in general. However, drones will revolutionize different medical aspects and applications cz-lekarna.com/.

Transportation of biological specimens is currently done by any type of transport (plane, train, car, bicycle) in high and low resourced countries. The majority of the specimens are collected in Physician offices, laboratories and clinics. There is a specific trend to concentrate laboratories in Europe. This leads to a serious problem of transportation: How to get the specimens from the satellite lab to the central lab? Moreover, for many other countries, there are far fewer labs which means that they are very far from the patient and it sometimes takes more than eight hours to reach the closest one.

There are several challenges depending on the country and/or the organization of the healthcare system. However, the main issues are transporting time and cost. Indeed, in several countries, it can take hours or days to get blood from a patient to the closest lab in order to get a blood analysis. This transporting time is affected by either traffic or infrastructure.  The main benefit of the drone’s (specimens or drugs) delivery system is that it can be used in any place, any time: it would work as well in London, New York, Beijing or Madagascar. The cost of this system would obviously be affected by the number of samples to transport. It would first be used exclusively for certain types of emergencies. The purpose of this system is indeed not to use drones in all cases, but to use the right vector at the right place.

In most cases, we can use other transport modes as it is indicated in the matrix below where Drones are the fastest and the less expensive 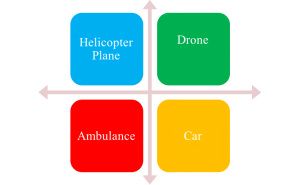 There have been several experiments and some of them are still on-going today for the transportation of specimens such as blood or other body fluids. Indeed, Médecins Sans Frontière (MSF) also known as Doctors Without Borders, a non-governmental organization used drones in Papua New Guinea to reach isolated patients affected by tuberculosis. The samples were collected by drones and transported to health centers in order to get the analysis.

Another example would be the start-up Zipline on-going project in Rwanda. Since July 2016, they are improving the distribution of blood and drugs in hospitals using drones.

Also, the Henry Ford Innovation Institute (US) is currently exploring the potential of drone delivery for HFHS at home health care.

In France, Drone for life association DFL has been created, near Bordeaux, to develop a solution connecting different hospitals (Pellegrin, Haut-Lévêque et Saint-André) in the city, and transporting by drones samples/products through the city with the participation of Betomorrow

Last but not least, India is experimenting drone transportation for organs in the context on transplantation.

There are a few challenges to overcome before drones become a part of our routine. Some are specific to the healthcare industry (specimen transportation) and others are linked to the vector used: drones.

In the article, “Biological samples transportation by drones: ready for prime time? “Giuseppe Lippi and Camilla Mattiuzzi give a good overview of the situation and present all the potential risks related to blood specimen shipmen by drones.

We will focus on the 3 keys challenges, showing that solutions for the future are ongoing

In the case of transporting blood from a patient to a lab, it must be demonstrated that the transportation will not affect the analysis’ results. A first study has been done on this specific matters showing that transportation of laboratory specimens via small UASs does not affect the accuracy of routine chemistry, haematology, and coagulation tests results from self-same samples. However, more studies should be done to collect more data.

In case of an accident, the package should resist to any type of shock and not be opened. Regulation is different depending on the country and must be adapted to this new transportation mode. WHO published Guidance on regulations for the Transport of Infectious Substances 2015-2016 including all information about packing samples.

No specific guidance is given for transportation with drones.

To ensure a safe, secure and environmental friendly development, and to respect the citizens’ legitimate concerns for privacy and data protection; EASA has been tasked by the European Commission – following the Riga Conference and its associated Declaration – to develop a regulatory framework for drone operations as well as concrete proposals for the regulation of low-risk drone operations.

Today, no one, would challenge the patient transportation by helicopter, which is obviously more expensive but critical to save life in specific situation.

The drone industry is diverse, innovative and international. It has an enormous potential for growth with the associated possibility to create jobs. Are drones the hero we all have been waiting for?

In 5 years from now, Drones, will be more secured, flight and specimen shipment regulations will be adapted and they will be used each time they can improve our life, and will….” impact positively society.”

Thierry Leonard has more than 20 years’ Sales and Marketing experience in the In Vitro Diagnostic industry and he has a Private Pilot Licence (PPL). He is doing an Executive MBA in the Institut Leonard de Vinci https://fr.linkedin.com/in/thierry-leonard #IVD #ehealth #medicaldevice #start up #diagnostic #microbiology